By Alexandra Wright November 14, 2019 Fitness
Very few highs are available to a bodybuilder that equal that of the “pump.” In Pumping Iron, Arnold Schwarzenegger himself described it as better than sex, and the sheer number of posts on Instagram in which users share their own pumped-up physiques would suggest that more than a few people agree. Dozens of supplements have flooded the market over the years claiming to help increase nitric oxide production (the main compound responsible for that elusive feeling), and the thought of adding another to the market seems almost redundant. 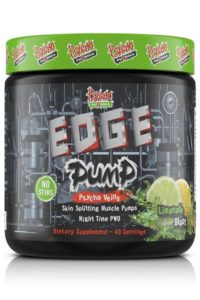 But Psycho Pharma, a company known for its outlandish supplements and even stranger naming conventions, would beg to differ. Insert Edge Pump, the latest addition to their product lineup that promises skin-splitting pumps at any time of day – dubbing it the “because you workout at night pre-workout.”

Sounds great, right? Just like every other pump-inducing product out there – but not so fast. Edge Pump features three key differences from the rest of the pack that might just make it worth a second look.

For starters, its stimulant-free formula isn’t just for pumps. It has Agmatine Sulfate, Taurine, and a stable version of Arginine called nooLVL – all ingredients found in the top pre-workouts. That means we may finally found the answer for those late night gym-goers who still want the pre-workout effect without the energy.

Additionally, it features GlycerPump®, a compound that yields roughly 65% glycerol to the body which results in increased hydration. So what does that mean for your pumps? In short, more water in the body means that when you exercise, your muscles get fuller and pull in more blood, enhancing athletic performance 1.

But it doesn’t stop there – Edge Pump also features S7, a one-of-a-kind nitric oxide booster released late last year that is completely plant-based. This non-nitrate compound consists of seven botanically-based ingredients that help boost nitric oxide levels by 230% – and keep them elevated for more than three hours after ingestion 2.

So is Edge Pump the newest addition to pass on in nitric oxide boosters? Or is it the plant-based answer to a hole in the market that will change your pumps forever? Try for yourself – available now at Strong Supplement Shop – you can Buy It Here.