Major Gains – The Most Powerful Natural Anabolic Made

Sources have told us that Assault Labs, the company responsible for the strongest test booster available today, is currently tackling the formulation of a natural anabolic. Customers have seen such incredible results from Sergeant Steel that they have been beating down the doors at Assault Labs for more, and this latest innovation, working title “Major Gains,” looks to be the answer (looks like Major Gains is going to be the official name). 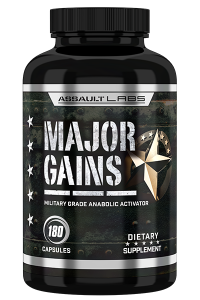 Assault Labs has become synonymous with fully-loaded performance supplements, and despite the recent surge of reformulated natural anabolics to hit the market already in 2018, they believe their multiple-compound Major Gains will help customers realize their full potential. Coupling several familiar ingredients with some used by the Russian military during wartime, Major Gains looks to bring an exciting new formula to the market.

Established ingredients include Laxogenin, a plant-based compound known for its impact on protein synthesis and cortisol control, and Ursolic Acid, a recomposition compound that in one study showed a 413% more lean mass gain and 5lb fat loss in athletes compared to a placebo group 1. We are told that Major Gains may also include Phosphatidic Acid, a phospholipid which can help increase mTOR up to 6 times, and a study showed users gained twice as much muscle and improved strength by 60% when compared to a placebo group 2.

But perhaps the most interesting ingredient we have identified is Maral Extract 4:1, another plant-based compound that was used by the Russian military in WWII to help soldiers recover strength faster. In studies, this compound, also known as Russian Leuzea, improved the working capacity of athletes by 10-15% 3. It has also been associated with adaptogenic and anabolic properties, suggesting that it can affect not just recovery, but also hypertrophy. Major Gains paired this with HICA, a leucine metabolite, a one-two punch shown to improve recovery through increased protein synthesis 5.

While we don’t have an exact release date as of yet, we expect Major Gains to head into the testing phase shortly, meaning it will hit the market relatively soon. Subscribe to updates from Strong Supplement Shop to be the first to know when we get more information about Major Gains and other new products.