Heard: Following the rumors last month that Olympus Labs is already completely replacing their 2017 natural anabolic, we got our hands on some exclusive product updates. With K1ngs Slayer’s updated formula generating some serious buzz, we at Strong Supplement Shop are here to pass them right on to you. 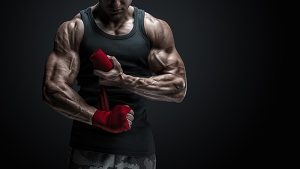 Olympus Labs identified their innovative new ingredient, Korean Mistletoe Extract (KMT), and immediately set out to research dosage, effects, and optimization. After vigorous testing and development, they felt they finally nailed down the perfect dosage to work synergistically with the other ingredients to give users the promised result. They report that so far, testers on the R&D team were extremely impressed with how quickly they achieved noticeable results with the product, going above and beyond initial expectations.

These reported benefits include enhanced levels of hypertrophy in addition to reduced catabolism, especially during cutting phases. As a whole, we are told users can also expect improved nutrient digestion, uptake, and utilization, leading to more growth and less bloat. With excitement growing from Olympus Labs’ fan base on social media and AnabolicMinds, it seems K1ngs Slayer is poised with a huge advantage as we head into shredding season this month.

As far as we know, K1ngs Slayer has already undergone an extensive testing phase and has headed to production. Rumors say we can expect to see it hit the market as early as later this month or in June . Be one of the first to know by clicking the button above to subscribe to updates from Strong Supplement Shop.