Gaspari – What is on the Horizon?

Strong Supplements is proud to partner with Gaspari Nutrition on its brand relaunch. We are pleased the market leader chose us first to help introduce their new products. We also want to welcome Oxygen Challenge 2 Members from Oxygen magazine. Please feel free to contact us via comments or Pro Support if you have any questions. 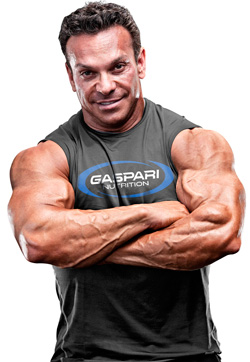 In the early days of modern bodybuilding one trail blazing two time runner up Mr. Olympia had a vision for fitness supplements. It was one that provided innovative products that performed well and gave its customers the results they sought. This man was the fiercest of competitors and lived life with an intensity like no other. He applied the same work ethic he adhered to in the gym, into his new business. To everyone else’s surprise this company not only thrived it became the leading fitness supplement company and generated multiple millions in sales. This company was successful because they delivered quality products to real people and got real results. This competitor’s name is Richard Gaspari and his company was Gaspari Nutrition.

For many years the company grew and before long became huge. Like all break-out leaders its success drew much competition and it became difficult to manage. Don’t get us wrong, Gaspari did a fine job growing the company on his own, but when cheaper rivals entered the market with low-cost sub par products he had a difficult time. Rather than give in to lower quality, he managed on razor thin margins and the company fell victim to the eventual recession.

A New Day for Gaspari and The Rest of Us

After a brutal few years Gaspari Nutrition began rebuilding. In order to maintain quality and compete on a price performance level above everyone else Mr. Gaspari came to an agreement with Hi-Tech Pharmaceuticals, an FDA certified manufacturer of supplements and pharmaceutical products. Hi-tech’s manufacturing size, economies of scale and operation capabilities now give Gaspari research and manufacturing capabilities far above the competition. We look forward to working with Gaspari and can’t wait until you see what is new and what is yet to come!